A coffee and a donut is always great escape from Holiday madness. Here's a few of our favorites. DONUT SHOPPE aka Shaikh's Place is in Brooklyn and is featured in our newly released book STORE FRONT II: A History Preserved.  We love the donut hovering over the steaming cup! 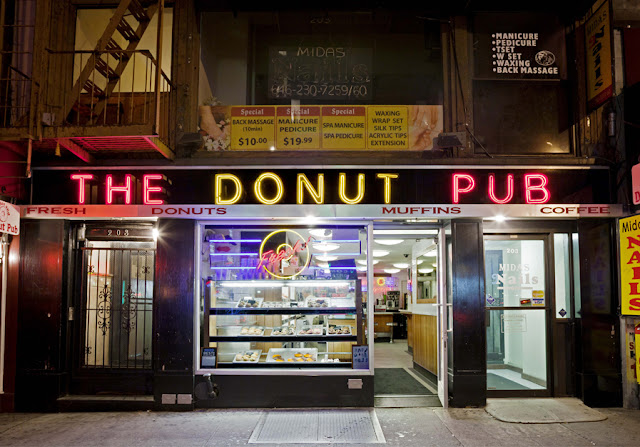 The Donut Pub on West 14th Street has been in business since 1964. It is a family-owned shop which is open 24 hours a day. The manager, Sam told us that, "Our donuts and muffins are made fresh daily around the clock. There are no preservatives or additives just flour and sugar and stuff." Business has declined at the ‪#donut‬ shop since St. Vincent's Hospital closed and Dunkin Donuts opened nearby. They are now celebrating their 50th anniversary with a special Golden Anniversary ‪‎donuts‬ which are glazed in ‪‎yellow‬ frosting with ‪#green‬ stripes. We love how this ‪‎storefront‬ glows at night especially the ‪‎vintage‬ ‪‎neon‬. Photo and full interview appear in our book New York Nights. 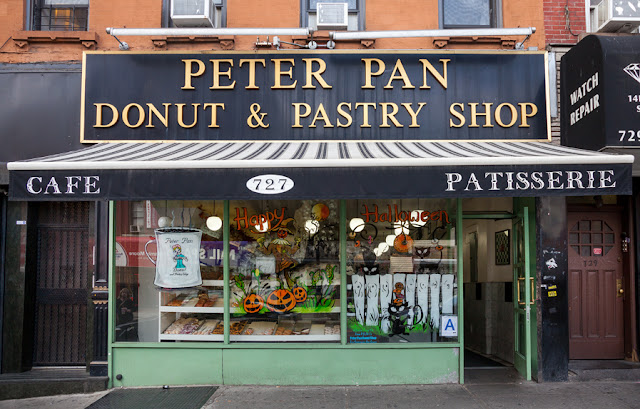 Peter Pan in Greenpoint, Brooklyn has been in business since the 1950s. It has been owned by Cristos and Donna Siafakas since 1993 and still has its original interior including an S-shaped counter. In addition to a wide variety of doughnut flavors, Peter Pan also serves breakfast sandwiches and milkshakes.

An assortment of these store fronts and many NEW prints are now available. Our limited edition signed prints range in size from 20x24 to 40x50 inches as well as a few select 11x14 prints. All C-prints are printed on Kodak Professional Endura Lustre Paper. Contact us for pricing and more info.