Matthew Maher, the owner of McSORLEY”S OLD ALE HOUSE on East 7th Street sadly passed away this weekend at the age of 80.

Matthew Maher, the owner of McSORLEY”S OLD ALE HOUSE on East 7th Street sadly passed away this weekend at the age of 80.

Mr. Maher started working as a bartender at McSorley’s in 1964 when it was still an all-male establishment known by its slogan, “good ale, raw onions, and no ladies”. Female customers were admitted to most bars by about 1960, but McSorley’s was the last bar in New York City to admit only men. Despite pressure from the women’s movement, it fought to maintain its exclusivity and in 1970 lost the case and was forced to admit women.

We interviewed Mr. Maher (standing in front of the bar in our photo) for our “Store Front: The Disappearing Face of New York” book and he told us that he “purchased the bar after the McSorley family was upset about the discrimination decision because the City didn’t side with them. They got a kind of resentment towards the bar and decided they wanted to sell it. Everybody talked about how the minute the women would be able to come into the bar, the tradition would be broken and the place would go under. So I decided to buy it from the family. For me, the women paid the bills, you better believe it”. 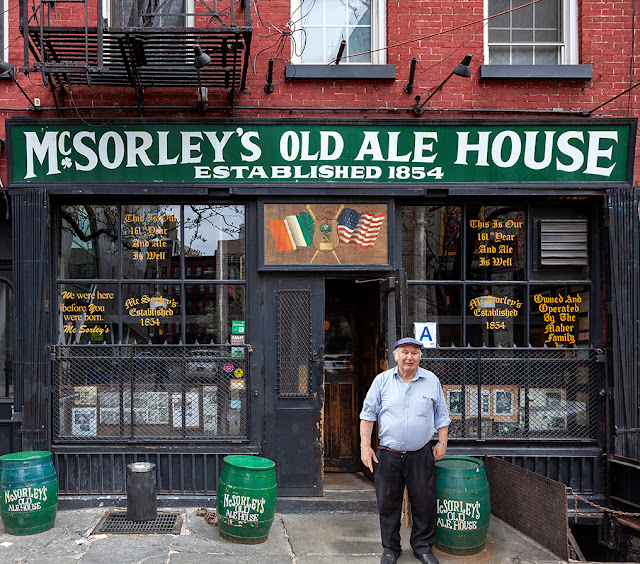 Posted by James and Karla Murray at 7:02 AM