THE ODEON has been in business since October 1980.

Two brothers, Keith and Brian McNally, and Lynn Wagenknecht founded the restaurant. Keith and Lynn, who were dating at the time and worked together at a successful restaurant on Fifth Avenue, were inspired to open The Odeon after they returned from a trip to Paris and felt that New York City lacked a worthwhile brasserie. They chose to open The Odeon in #TriBeCa, a neighborhood, which was still very commercial and desolate at night, but was becoming home to many young artists, who were attracted to cheap loft spaces in the area. The location on West Broadway was the site of the old Towers Cafeteria, which had been in business since the 1930’s. Brian McNally came up with the name The Odeon for the restaurant, taking it from the London-based Odeon cinema chain. Keith McNally and Wagenknecht kept some of the cafeteria’s original interior including the hanging globe lanterns, and terrazzo floor and refinished original wood paneling, which was hidden behind Formica panels. They added a Bakelite frieze of New York’s skyline on the wall and a curved, mirrored 1930’s #ArtDeco bar and also added a new red #neonsign for “The Odeon” on the front façade using the same #lettering style as the old “Cafeteria” #neon sign, which they left, on the side of the restaurant. After hiring a rising-star chef, Patrick Clark, The Odeon quickly became a success, frequented by many artists and creative types, including Andy Warhol, Jean-Michel Basquiat, Richard Serra, John Belushi, Tom Wolfe, Jay McInerney as well as art dealers who frequented the nearby SoHo galleries.

Our photo of Odeon taken in 2010 appears in our book "New York Nights". 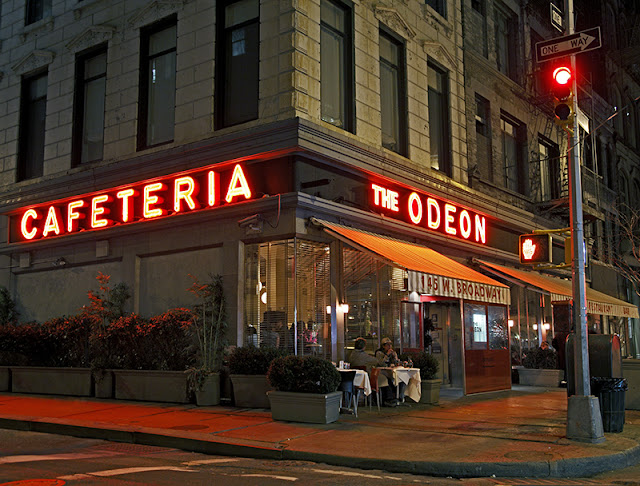 Posted by James and Karla Murray at 7:21 AM