RADIO CITY MUSIC HALL located within Rockefeller Center @rockcenternyc is the largest, indoor theater in the world. It had its opening debut on December 27, 1932.  Architect, Edward Durell Stone and interior designer, Donald Deskey designed Radio City Music Hall in the elegant #artdeco style with an opulent interior using the finest of both precious and industrial materials.

The theater's great stage was designed and built by Peter Clark in 1932. It is framed by a massive proscenium arch measuring 60 feet high and 100 feet wide, and has a ceiling, which gives the illusion of a giant sunset. The stage is comprised of three sections mounted on hydraulic-powered elevators and is considered by technical experts to be the most perfectly equipped in the world. The large elevators contain turntables, which make it possible to execute fast and extensive scene changes as well as special stage effects such as choruses rising up through the floor. Mechanisms, still in use today, make it possible to send up fountains of water and bring down torrents of rain onto the stage. Fog and clouds are even created by a sophisticated mechanical system, which draws steam directly from a nearby Con Edison generating plant. A fourth elevator also raises and lowers the entire orchestra from the pit. The gold stage curtain, extending from the ceiling to the floor, is the largest in the world.

The #theater contains 5,874 seats and has more than 25,000 lights including four-color stage lighting, ornate chandeliers and mirrors in the Grand Foyer, lobby and eight lounges and smoking rooms. @radiocitymusichall 's marquee, featuring multi-colored #neon, is a full city-block long. Photo from 2010 and full text appear in our book "New York Nights". Signed limited edition Prints of Radio City Music Hall are Available ranging in size from 24x24 inches to 48x48 inches in height. DM or email us at jandkphoto@att.net for more info 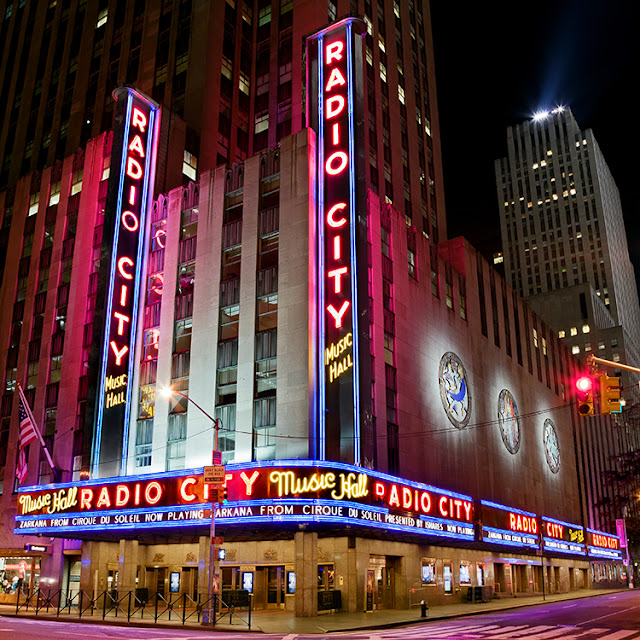