The theater was known for its vaudeville Zeigfeld Follies show, which was presented throughout the summer on the roof garden because air conditioning had not yet been invented. In 1940, the theater became the location of the Bond clothing store, which became famous for its gigantic neon sign and its offer advertising two pairs of pants with every suit purchased. The Bond clothing store closed in 1977 and in 2005, Shelly Fireman opened a classic Italian steak and seafood restaurant in the space and named it after the former Bond clothing store. We spoke with owner, Shelly Fireman for our book, “New York Nights”, who told us, "I was inspired to open Bond 45 because I thought it was a great location for a restaurant. I took the easy way out and gave it a name that everybody could pronounce and remember. At the same time, I respected the history of the building because the Bond clothing store was once housed in there so I installed neon signage reminiscent of the huge neon sign that once graced the store. I luckily found a guy who had worked on all these Woody Allen movies of old New York and he helped create the signage, drawing it all by hand not a computer.”

Bond 45 @bond45nyc recently moved to a new location at the former location of Sofia's, the restaurant of the Edison Hotel on 46th Street, where the Corleone family's chief enforcer met his end in the movie "The Godfather". Paying homage to its past location, Bond 45 again has gorgeous oversize #neon signage and is best known for its vegetable antipasto bar which offers a rotating selection of market vegetables and features an expansive menu that includes veal chops 🍖, seafood 🦐, house made pasta 🍝, thin crust pizza 🍕 and breakfast 🍳 all day. 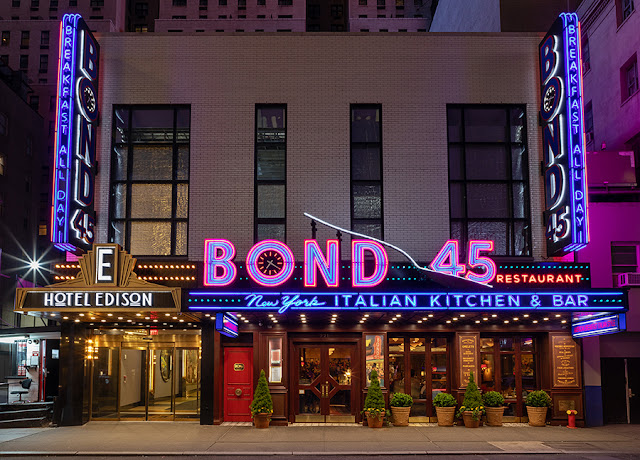