From our Behind the scenes at the United Palace, Washington Heights’ opulent ‘Wonder Theatre’ photo essay for 6sqft

"The “men’s smoking lounge.” Since women weren’t supposed to be smoking, their smoking lounge, referred to as a “retiring lounge” was a much smaller, discrete space. Fitelson says the best secret of the theater is that the Reverend turned the men’s smoking lounge into his library, adding floor-to-ceiling bookshelves. When he passed away in 2009 and all his books were put in storage, they painted the walls the current red. Since the photos from the ’30s are all black-and-white, there’s no way of telling if it was the original color. They also painted the fireplace stark white. When Woody Allen came in in 2015 to shoot “Cafe Society,” his team wanted to use the room as a 1920s jazz lounge and said they’d like to paint the fireplace but would restore it after filming. But Palace leadership thought the new paint job was so spectacular, they decided to keep it!" 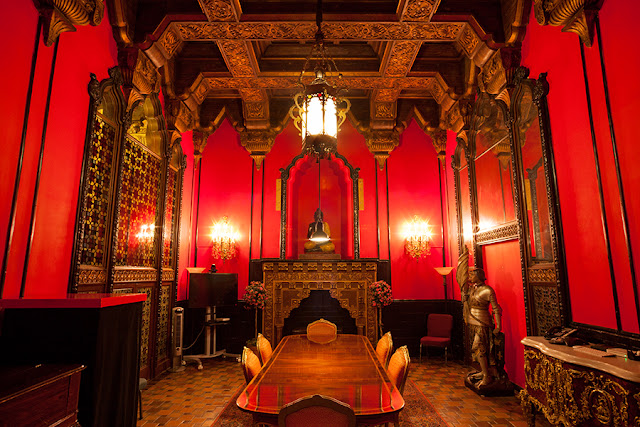 Posted by James and Karla Murray at 9:45 AM