Complete Traveller Antiquarian Bookstore on Madison Avenue at 35th Street closed in January 2015 after being in business for over 30 years. It was the first ‪#‎travel‬ ‪#‎bookstore‬ in the United States and was founded by Harriet and Arnold Greenberg, who were both travel writers. They had an extensive collection of ‪#‎vintage‬ and ‪#‎antique‬ travel ‪#‎books‬ as well as rare books and maps. They also had a huge selection of travel guidebooks including ones published in 1901 by Adam & Charles Black, German-published Baedeker guidebooks, and American guidebooks commissioned as part of the Works Progress Administration during the Great Depression. The bookstore is still operating online for anyone interested in finding rare travel books. The loss of this bookstore hit us particularly hard because there are so few independent bookstores left in the city, and especially one with such a unique collection. According to state data, between 2000 and 2012, the number of bookstores in Manhattan fell about 30 percent, from 150 stores to 106 stores. 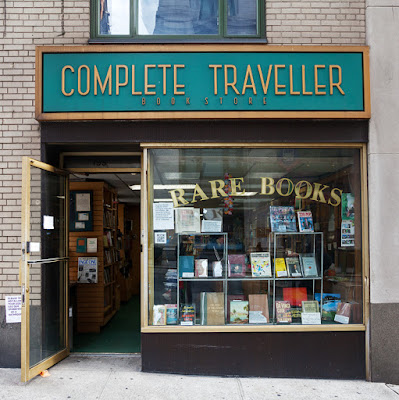 Posted by James and Karla Murray at 12:07 PM