Monte's Trattoria in Greenwich Village has been in business since 1918.

Monte's Trattoria in Greenwich Village has been in business since 1918. It has been owned by chef Pietro Mosconi and his family since 1983. The ‪#‎neon‬ ‪#‎sign‬ is from the 1950s. Pietro told us that when he bought the ‪#‎Italian‬ ‪#‎restaurant‬ from the original owner he decided to keep the name and ‪#‎signage‬ because he was so fond of it. We love this ‪#‎vintage‬ sign too, especially the chef holding a steaming bowl of ‪#‎pasta‬. The name "Monte" was shortened from Monteverde, a city in ‪#‎Italy‬ known as the "green mountain". Photo of entire restaurant and full interview with Pietro Mosconi appear in our book "New York Nights". 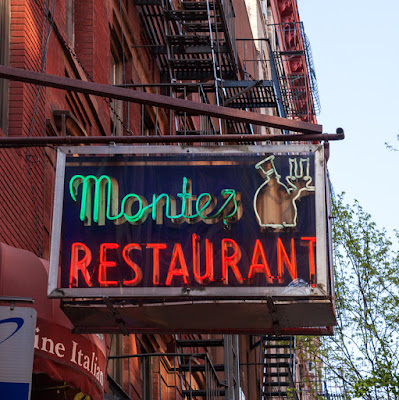 Posted by James and Karla Murray at 6:14 AM