Physical Graffitea, a cafe in the East Village specializing in organic and fair-trade teas, is located on St. Mark's Place on the ground floor of the historic "Physical Graffiti" buildings that were featured on the iconic cover of the Led Zeppelin album of the same name. "Physical Graffiti" was released on February 24, 1975 and was the sixth studio album by the English rock band Led Zeppelin and went platinum sixteen times. To celebrate the album's 40th anniversary this year, the album was reissued and newly remastered by guitarist and producer Jimmy Page. The award-winning ‪#‎album‬ cover design featured two tenement buildings which were constructed in 1890. The fourth-floors were removed on the cover art to make them fit the square shape of the album, and the windows of the buildings were cut out to reveal the letters of the album title printed on the inner sleeve.

We will be leading  a special 2-hour Store Front walking tour of the East Village and Lower East Side on Sunday, June 7th at 12pm sponsored by the Municipal Arts Society of New York. @mas_nyc The cost is $20/$15 Members We will visit some of the remarkable ‪#‎momandpop‬ ‪#‎storefronts‬ documented in our book "Store Front: The Disappearing Face of New York" and "New York Nights" and remember those that have disappeared. We will stop in many culinary specialty stores and sample ‪#‎food‬. Tickets can be purchased online at www.mas.org or call (212) 935-2075 Monday-Friday 9-5. Meeting location is provided after tickets are purchased. Tour will proceed rain or shine. ‪#‎ledzeppelin‬ ‪#‎tea‬ ‪#‎eastvillage‬ ‪#‎mas_nyc‬ ‪#‎savenyc‬ ‪#‎masnyc‬ 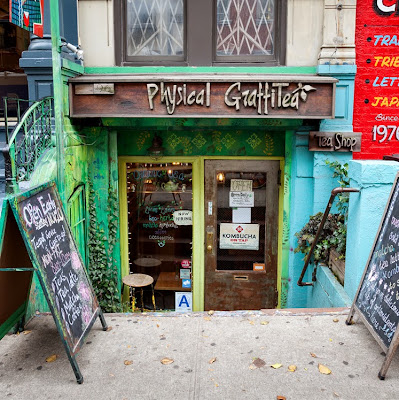 Posted by James and Karla Murray at 10:28 AM