Thanks to Jeremiah for reminding us of three more storefronts that NYC lost in 2013:

Our previous post about New York City storefronts lost in 2013: 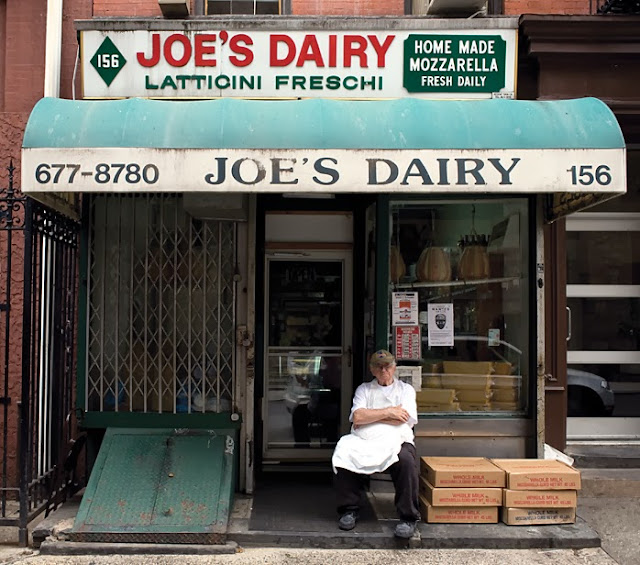 Joe's Dairy was located on Sullivan Street by W. Houston Street in a neighborhood that was once considered the western half of Little Italy.  It was initially called Frank and Al’s Dairy and has an original storefront dating back over 90 years. Its Joe's Dairy signage was installed in 1972. Anthony Campanelli, bought the store in 1977 and closed the business in May 2013.

The recipe we use to make the homemade mozzarella is the original recipe from when the store was opened over 83 years ago, but what happens is that the recipe slowly changes a tiny bit as the person who has taken over the store follows it.  We have all added our personal touches over the years.   There’s more to making mozzarella than you would think.   I could show you how to make it step by step but you still wouldn’t be able to do it, because it’s all really in the technique.  The main ingredient for mozzarella is the milk curd.  I use like 25-30 bundles of curd delivered every day from New Jersey.  And there’s 45 pounds in each bundle.  So it’s the curd and the water and the knowledge.  That’s the only ingredients you got.  The water is also very important to the recipe.  There’s a lot of hardness in different waters and here in New York the water is great for making mozzarella.  If you go to Florida or California, it’s a completely different thing.  I know people who went out there and tried to make mozzarella and what they are doing now is having water tanked out to them from New York because they can’t make the mozzarella the same way without it.  It breaks down.  It’s like the chemicals…it sounds strange but there is a chemical imbalance with the water everywhere else that turns the cheese different.   Everything that we make here has to do with mozzarella.  That’s what we are known for.   We even have a smokehouse outside at the back of the store where we do all our smoking.  I don’t own this building.  I only rent the store.  When I’m ready to retire, it will probably be a lost art in my family because I have a daughter but I won’t allow her to do this.  It’s a lot of hard work.  It’s not that a woman couldn’t do it, but you have to get up really early and work long hours.  I feel like I do this because I chose to.  Nobody asked me to do it.  This is what I wanted to do but I wouldn’t suggest it to anyone.  I broke the tradition in my family because I went into the cheese business instead of the ice business that my grandparents and parents were into.  I lived upstairs from this store when I was a kid and I started working here in 1970.  I helped the owner out by working behind the counter and took an interest in the business.  I really didn’t like school and decided this was what I wanted to learn…the cheese business.  I am very fortunate because I have a really good customer base.  Many people who have moved out of the neighborhood, come back here just to buy fresh mozzarella from me.  Their roots are here but the neighborhood has really changed.  There are not too many Italians living here anymore.  The old timers are dying and their children are moving out so the traditions of years ago are being lost.  We’ve lost most of the Italian families in the neighborhood but we’ve gained new people, like New York University students.  The University has been buying many of the buildings in the neighborhood to use as dormitories and classrooms and big developers are buying old buildings and turning them into co-ops.  So basically, it’s a lost neighborhood as far as family goes.  Its not family-orientated anymore.  Anthony Campanelli, owner of Joe’s Dairy 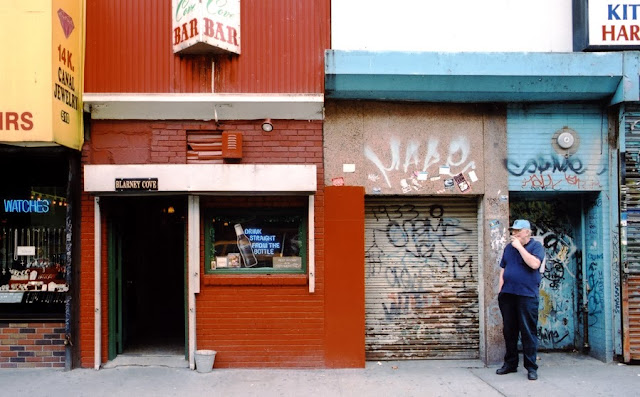 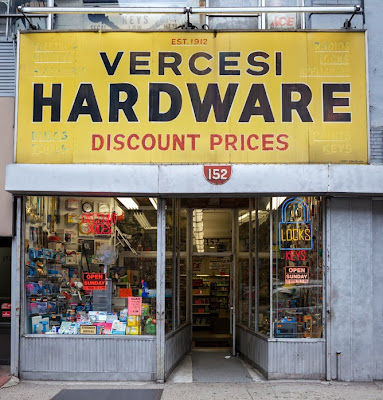 Vercesi Hardware located on E. 23rd Street between Lexington and Third Avenues was a family-owned business that was established in 1912. It closed in November 2013.

My father opened this store in 1912 and now I am running the business along with my daughter.  We own this building and that’s one of the reasons why we are still here.  The neighborhood has really changed and gotten very expensive. Many new people have moved to the area including lots of college kids because of the nearby schools and universities.  Most of the smaller stores, like the shoemaker and the tailor nearby, have closed.  We’ve definitely had to change our merchandise selection over the years to fit with the neighborhood.  We’ve always carried hardware but now we sell more small appliances and houseware items.  Many of our customers our very loyal to us, and even if they’ve moved out of the neighborhood, they travel back to shop here because they like the helpful staff and friendly atmosphere.   Our name, Vercesi, spells service, it’s an anagram. Paul Vercesi, Jr., second-generation owner
Posted by James and Karla Murray at 6:47 AM