In late December, the NYC Landmarks Preservation Commission (LPC) voted to landmark the South Village Historic District including the locations of some of our favorite places.

Many thanks to our friends at The Greenwich Village Society for Historic Preservation's (GVSHP) for their instrumental work in this historic landmark designation. The NYC Landmarks Preservation Commission (LPC) voted to landmark the South Village Historic District, a two hundred forty-building, thirteen-block section of Greenwich Village south of Washington Square Park, and the second phase of the Greenwich Village Society for Historic Preservation's (GVSHP) proposed South Village Historic District landmarked in June of 2010. GVSHP first proposed landmark designation of the South Village ten years ago and submitted a formal landmarking proposal with boundaries to the City in 2006. Landmark designation prohibits demolitions and alterations of existing buildings without the permission of the Landmarks Preservation Commission, and tightly controls new development to ensure it is in character with the neighborhood. In recent years, NYU and private developers have made several large incursions into the neighborhood, including a series of oversized, out-of-character buildings on Washington Square South.

The landmarked places include:


CAFFE REGGIO. The cafe is located on Mac Dougal Street between W. 3rd Street and Minetta Lane.  The café has been open since 1927 and is famous for its espresso machine, which was imported from Italy by the original owner, Domenico Parisi.  Mr Parisi spent his life savings of $1,000 to import the chrome and bronze espresso machine to his café.  The machine was made in 1902 and was the first of its kind and has a base formed by dragons and an angel sitting on its top.  When filled with hot water, the machine makes a cup of espresso in just about three seconds.  Mr. Parisi is credited as being the first person to introduce the coffee drink, cappuccino to the Unites States.  Caffé Reggio originally only served coffee, all made by Mr. Parisi himself using the espresso machine.  In the 1960’s, Mr. Parisi sold the business to Hilda and Niso Cavallaci, and their son Fabrizio now runs the café.

MINETTA TAVERN.  The tavern was established in 1937. It was named after the Minetta Brook, a small stream that ran southwest from 23rd Street to the Hudson River. The original owner, Eddie Sieveri became known as Eddie Minetta because he owned the restaurant for so many years. Minetta Tavern became a famous dining spot for beatniks, celebrities and literary luminaries including Ernest Hemingway, Ezra Pound, Eugene O’ Neill, E.E. Cummings, Dylan Thomas and Joe Gould. Eddie Sieveri sold the restaurant in 1972 and in 1995, Taka Becovic from Montenegro, Albania who had worked as a busboy at the restaurant purchased the business. Taka Becovic kept the original Northern Italian menu and also left the original interior unchanged. In 2008, Becovic reluctantly sold the restaurant and its entire contents after his landlord considerably increased the rent. Keith McNally, Lee Hanson and Riad Nasr who have worked together on various restaurants since 1997, took over Minetta Tavern in March 2008. They kept the restaurant’s name and historic neon sign and during renovation tried to preserve much of its distinctive interior including the original wood paneling and wooden bar with its stained-glass shelving, murals of Greenwich Village sights and scenes along the walls, as well as pictures of faded celebrities. The menu however was changed to a largely French menu. 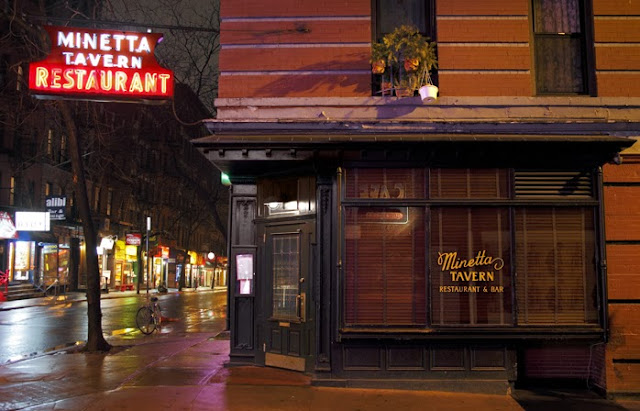 CAFE WHA? Bob Dylan's first performance after arriving in New York was at Cafe Wha? Peter, Paul, and Mary also performed there and Jimi Hendrix was "discovered" there in 1966. 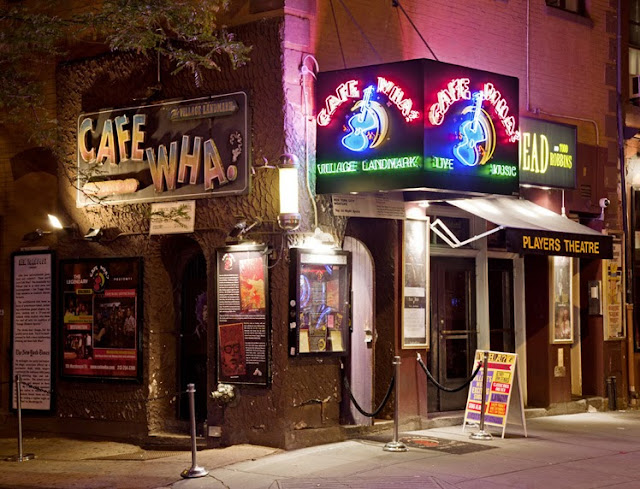 MONTE’S TRATTORIA.  Monte's has been in business since 1918. It has been owned by chef Pietro Mosconi and his family since 1983.
What is original is the neon sign outside, which was installed in the 1950’s. I kept the signage because I liked it and also felt strongly about keeping the name Monte’s, which was shortened from Monteverde, a city in Italy known as the “green mountain.” I feel fortunate that my father was so shrewd and brought me here to New York so that I could have this wonderful opportunity. Now my son is working at the restaurant with me and I am teaching him everything I know. It’s a hard task to fill.
Pietro Mosconi, chef and owner (Full interview appears in NEW YORK NIGHTS) Posted by James and Karla Murray at 6:22 AM