Jephson Drugs in Coral Gables, Florida has a gorgeous #neonsign which was installed in 1940 when the Jephson family took ownership of an existing pharmacy located on Ponce De Leon Boulevard in the Coral Gables neighborhood of #Miami.

Because "Coca Cola" is a trademarked name, the Miami Florida branch of the Coca Cola Bottling Company leased the #signage to the drug 💊 store. The pharmacy moved from its Ponce de Leon location in 1979 and could not take the huge and heavy #neon sign with it.

Thankfully the Coca Cola Bottling Co. @cocacola arranged and funded its removal and donated it to HistoryMiami Museum in downtown Miami @historymiami where it is presently on display!

• We were lucky enough to get a personal tour of this wonderful museum with the Executive Director, Jorge Zamanillo. Not only is this incredible @coke_archives #signage on display (you can walk around it and see it from both sides) but the HistoryMiami Museum also has on display the neon “B” from the original Burdines store which was located in downtown Miami and many other interesting artifacts and archival items including the Spitz projector from the former Miami Space Museum , a historic Seminole dugout canoe 🛶 and even a Haitian boat and a Cuban raft that brought refugees to Miami. We highly recommend visiting! 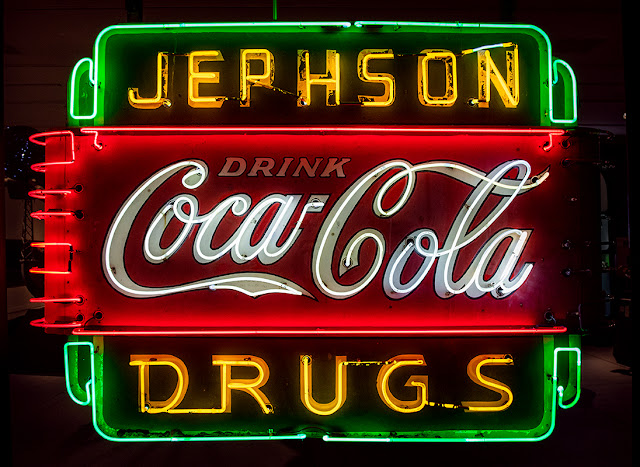 Posted by James and Karla Murray at 6:20 AM