White Horse Tavern in the West Village has been in business since 1880.

It is one of the few wood-frame structures still in existence in New York City. The historic bar, once a hang-out for dock workers on the Hudson River piers was even open during Prohibition as it was a favorite haunt of Mayor Jimmy Walker. When we photographed White Horse Tavern in 2010 for our book “New York Nights” we also interviewed the owner, Eddie Brennan who bought the business in 1967 and later purchased the entire building. Below is an excerpt from the full interview. “Dylan Thomas was a frequent customer of the bar and often drank in the back room, to avoid the crowds. I remember him as just another customer when I was like 16, 17 years old and I would come into the bar to have a drink with the guys from the pier. I didn’t realize that he was a highly respected writer and poet. Dylan Thomas liked this bar because it was like home to him. He was a Welshman and was used to hanging around working class guys like miners and seafaring people. He would walk down here from the Chelsea Hotel where he was staying at the time. This was the last place he had drinks at before he became ill and died in 1953. The overhanging #neon sign went up some time in the 1940s. I recently had the sign entirely rebuilt because it had been very rusty and shaky.”

We just heard that the entire building has now been sold by Eddie Brennan with the sale contingent upon obtaining a leaseholder to maintain the century-old bar as is. The restauranteur Eytan Sugarman who has leased the space for 15 years has said that he will take the bar's history into account and wants to preserve its rich history. 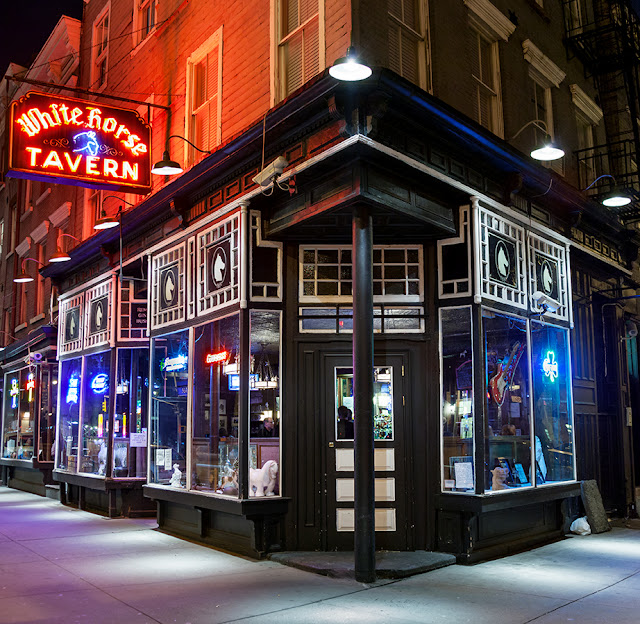 Posted by James and Karla Murray at 7:37 AM