In honor of the anniversary of Jack Kerouac's birthday yesterday, March 12, 1922 we are highlighting one of his favorite haunts in the East Village, Gem Spa, where he often had egg creams

Gem Spa at the corner of 2nd Avenue and St. Mark's Place has been in business since the 1940s and is famous for its egg creams, a quintessential New York beverage originally served in candy stores throughout the Lower East Side beginning in the 1920s. The egg cream does not contain eggs or cream but is a mixture of very cold milk, seltzer, and flavored syrup. Because most of the original soda fountain locations have closed, true egg creams are rapidly disappearing. To this day, Gem Spa continues to make their egg creams using the same recipe and original soda fountain machine from the 1940s. The countermen learned to make egg creams from the previous owner who learned from the previous owner before him. The chocolate, vanilla, and coffee-flavored syrups were once made in the basement by the store’s original owner. On a typical weekend night, Gem Spa sells about 70 egg creams.  Photo from 2001 appears in our book “Store Front: The Disappearing Face of New York” along with an interview with the current owner who explains about Gem Spa’s secret to making their best-selling egg creams. 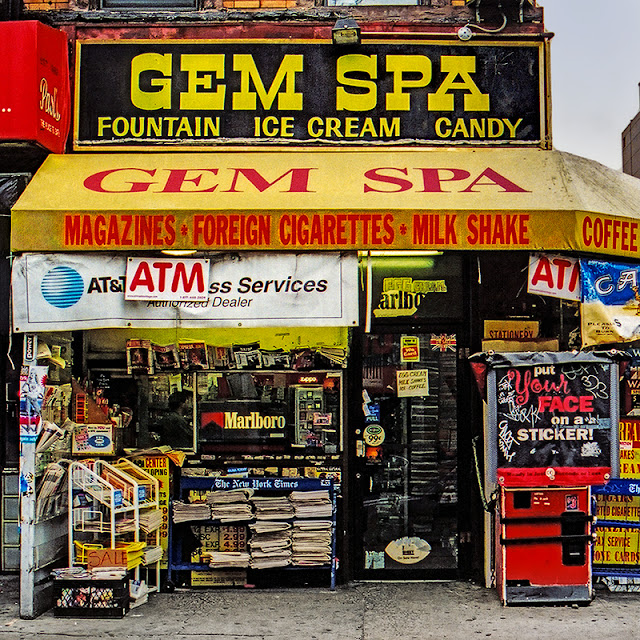 Posted by James and Karla Murray at 3:54 AM