Please join us on Sunday, August 21st at 12pm as we lead a walking and tasting tour of some of our favorite East Village food establishments, "STOREFRONT: A HISTORIC EAST VILLAGE FOOD TOUR with Untapped Cities.

Discover the food, history and diverse culture of the East Village while tasting delicious specialties from at least 6 different tasting stops. Many family-run businesses started out as traditional mom-and-pop stores passed down from generation to generation, and defined their neighborhoods. Not only are these modest small businesses falling away in the face of modernization, gentrification, and conformity, the once unique appearance and character of New York City's colorful streets suffers in the process. On this tour you will learn about the diverse German, Italian, Jewish and Ukranian history of the East Village and try some fresh homemade Italian mozzarella, drink an authentic New York City egg cream or have a freshly roasted cup of coffee, taste a hot Ukranian potato pierogi with toppings from Veselka, sample a freshly baked Jewish sugar cookie, enjoy an authentic New York hot dog and tropical drink and taste a freshly baked Italian cannoli.

One of the many small businesses we will stop and sample food from is Veselka, located at 2nd Ave at 9th Street. Veselka was established in 1954 by Ukranian immigrant Wlodymar Darmochal. It was originally established as a newsstand/candy store that also sold soup and sandwiches. The word Veselka means rainbow in Ukranian.

In the 1900s there was a huge Ukranian population in the East Village, numbering around 60,000 after World War II. Today, about 20,00 Ukranians live in a small section of the East Village centered around East 7th Street near Second Avenue, the location of St. George’s Ukranian Catholic Church. 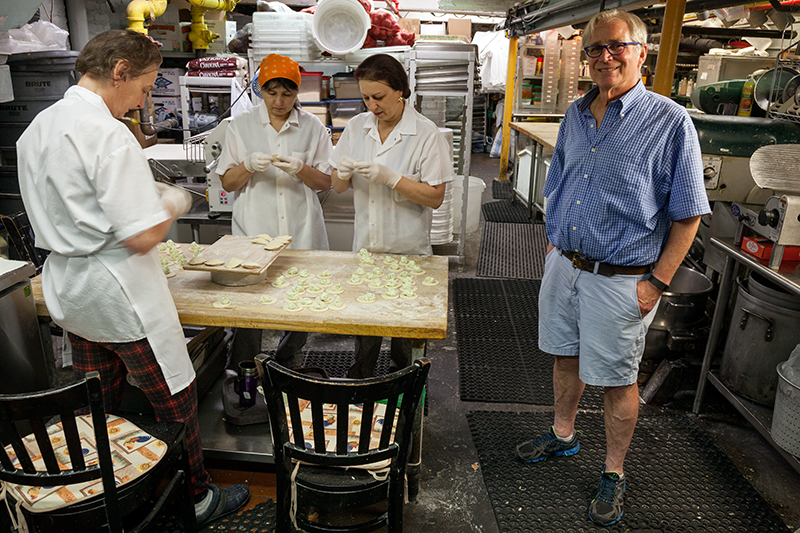 Tom Birchard (seen above), the second-generation owner, told us when we interviewed him from our book, Store Front II- A History Preserved that he first came to visit Veselka, while dating the owner’s daughter, Marta.

Marta brought me here early on in our courtship to meet her father, I had an image in my mind of what Veselka looked like but when I got here, it was way more decrepit and run-down than I had thought, but was still funky. It was not a restaurant at that time but was more like a typical Lower East Side candy store that sold cigarettes, egg creams, newspapers, Spaldeens, and school supplies. There was a U-shape counter with stools and 4 tables with 4 seats each but food was a very minor part of the business. The offerings were very basic Ukranian but it had a tremendous appeal because many people have an emotional connection to that kind of food. Anyone from Eastern Europe, whether they are Jewish, Polish or Ukrainian, all love this ethnic food. I soon fell in love with this neighborhood and its energy and the ethnic food of my new family. 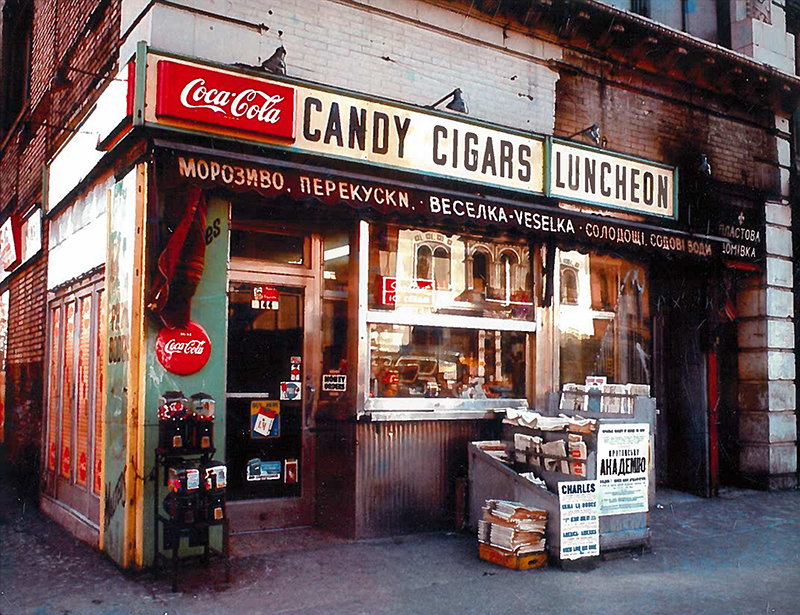 (Veselka circa 1970 storefront courtesy of Veselka)

The restaurant now specializes in homemade pierogies, borscht and potato pancakes, or what Tom Birchard likes to refer to as Ukranian “Soul food”! Tom explained that he began working for his father-in-law in the late 1960s and worked alongside him until Mr. Darmochal suddenly passed away after having a heart attack. At that point, he knew he had to change the business into a restaurant.

This neighborhood had a densely populated Ukrainian community but the old folks were either dying off or moving away. At the same time, the neighborhood really started going to hell because of the heroin, speed, and crack epidemic. I became really close to going bankrupt but somehow managed to hold on by borrowing money. I felt pretty strongly that in the long run things would turn around and also figured out that the future of the business was in the food. I transitioned out of the candy store model into turning the business into more of a diner/luncheonette. 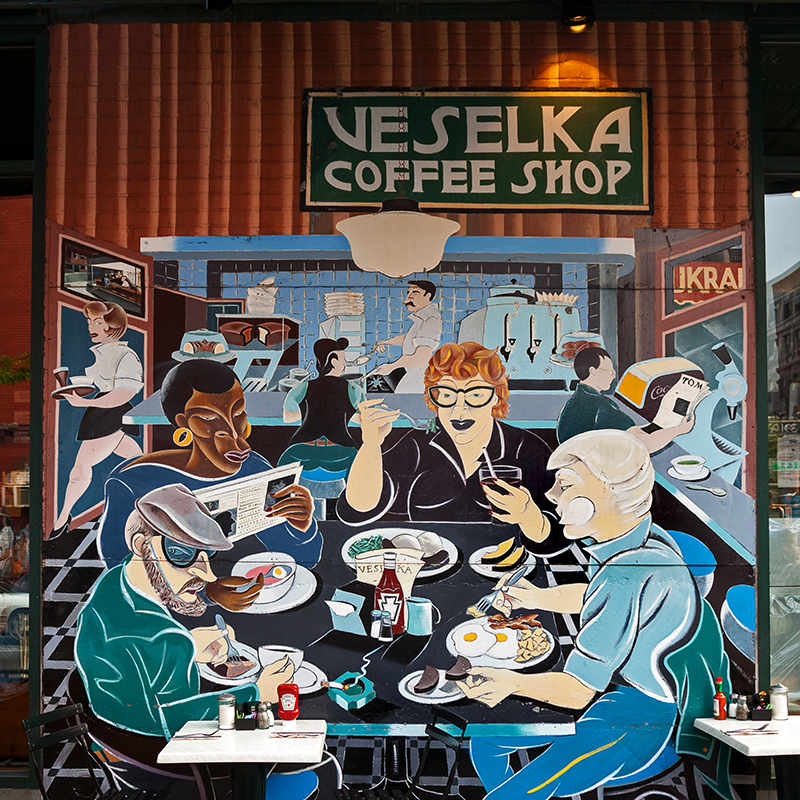 Pierogies and borscht are the backbone of this business. I have one lady that comes in every day just to make borscht, making on average about 100 gallons a week. I have four full-time ladies who do nothing but make pierogies. I followed my heart and served what I loved and it worked.

Veselka now makes 3,000 pierogies every day, 2,500 potato pancakes every week and 5,000 gallons of borscht every year. 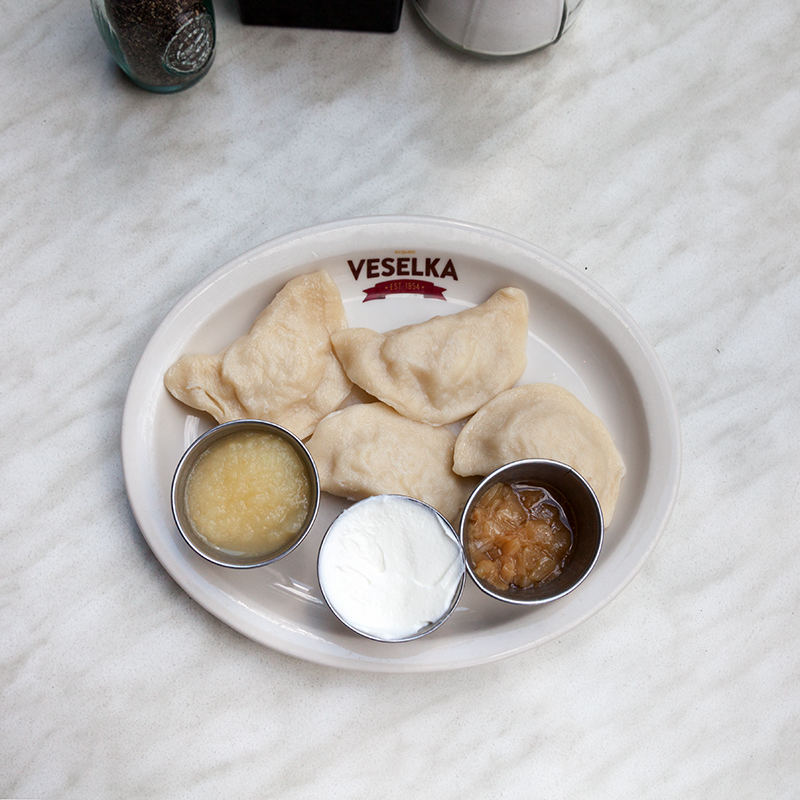 Tom Birchard’s son, Jason, joined the business in the late 1980s and was instrumental in opening Veselka 24 hours a day. 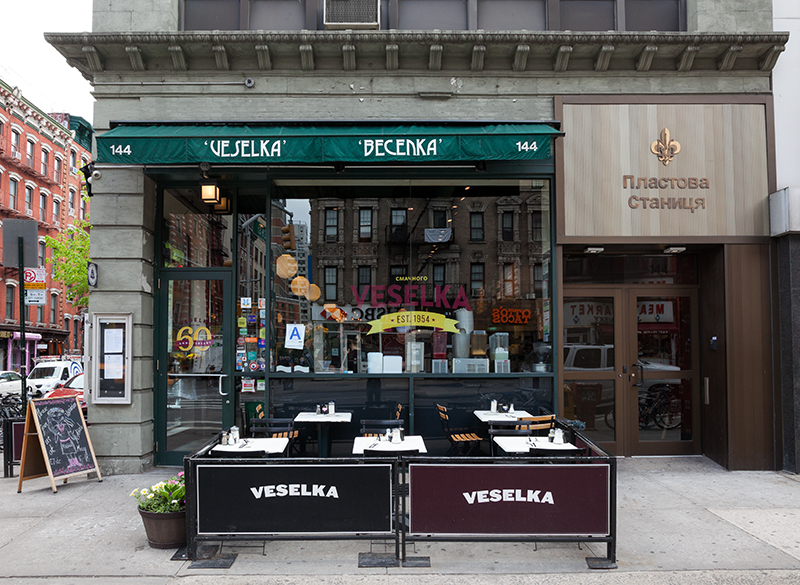 (Veselka 2014 from our book Store Front II- A History Preserved)


To join us on this historic East Village Food Tour please register at:

http://untappedcities.com/storefront-a-historic-east-village-food-tour-with-james-karla-murray/
Posted by James and Karla Murray at 1:25 PM