Store Front II — A History Preserved at MOSCOT on The Lower East Side, with Authors James and Karla Murray

The evening will feature Store Front II photography, with a focus on the Lower East Side, and a Q&A session, followed by a book signing and reception.

About Store Front II:
The Murrays have been capturing impeccable photographs from the streets of New York City since the 1990s. Store Front II chronicles their continued efforts to document a little-known but vitally important cross-section of New York's "Mom and Pop" economy. From MOSCOT to Sammy's Roumanian Steak House, and Economy Candy to Parisi Bakery, the Murrays reveal how New York's long-standing mom and pop businesses stand in sharp contrast to the city's rapidly evolving corporate facade.

About James & Karla Murray:
The professional team of James and Karla Murray have seen their work exhibited in galleries and housed in permanent collections worldwide, but New York City remains their passion and their home. Their landmark 2008 book, Store Front, was lauded by critics, and their last book New York Nights, was the winner of the prestigious New York Society Library's New York City Book Award (2012). Store Front II was named by Publisher's Weekly as one of the 35 "Big Indie Books of Fall" and was the winner of the winner of the Foreword Reviews' 2015 INDIEFAB Book of the Year Award. The Guardian praised, “James and Karla Murray’s Store Front photography books capture a disappearing world — New York’s small stores and their unique and precious aesthetics.” 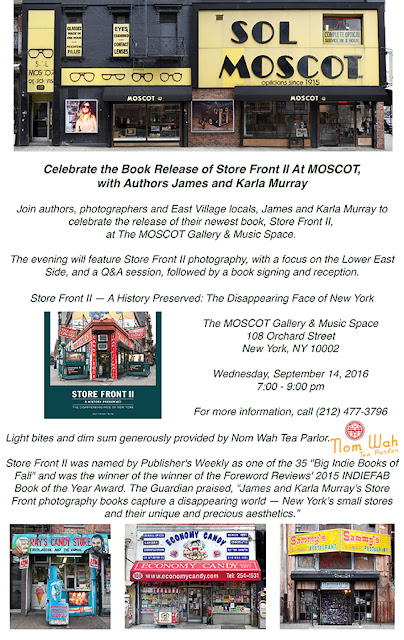 Posted by James and Karla Murray at 12:57 PM