In Honor of ‪#‎NationalCheeseburgerDay‬....Cozy Soup 'n' Burger in Greenwich Village

Cozy Soup 'n' Burger in Greenwich Village has been in business since 1972 and has been in the same family since opening.

We interviewed Demetrios Benetos, second-generation owner for our book NEW YORK NIGHTS, where this photograph also appears:
"My two uncles opened this restaurant in 1972 after emigrating here from Greece. I am the first-generation in our family to be born here in the United States and I’ve been working here for the last eight years. My uncles still work alongside me and I think this family atmosphere really sets this place apart. This area of the Village has changed significantly since we opened. There were many more retail stores, including lots of shoe stores along Eighth Street but now most of them have gone out of business and been replaced by food stores. So we have lots more competition than we ever had in the past.  The vertical neon sign outside is original but the large neon along the front was installed in 1999. We really love are neon signs but they are so problematic. We have to turn them off every times it rains because they short out. It is getting more and more expensive to maintain the sign but it definitely helps bring in customers. . Our menu has stayed pretty much the same with diner staples including ‪#‎cheeseburgers‬ , ‪#‎soup‬, ‪#‎sandwiches‬ and ‪#‎fries‬ but we have added some new things such as health-conscious items. We hope to be here for a long time but we do not own the building. Luckily, we have a long-term lease at a fair market price." ‪ 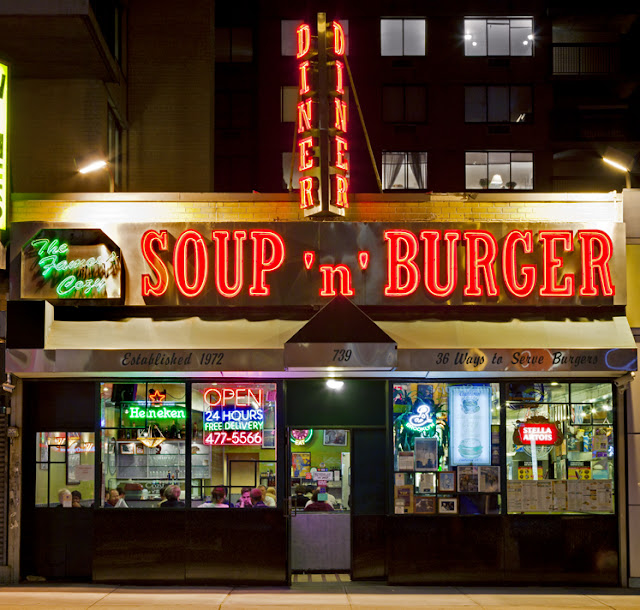 Posted by James and Karla Murray at 10:30 AM