Today, in honor of National Cheesecake Day we are posting our photo of Junior's in Fort Greene, Brooklyn.

Junior's is a family-owned restaurant that was opened in 1950 by Harry Rosen. It is known for its world-famous #cheesecake as well as its large portions and reasonably priced sandwiches. During the holidays there are lines out the door and down the block for people to buy their cheesecakes. We absolutely love their #cherry topped cheesecake which has graham cracker crust. Cheesecake in 1950 was the most ordered out-of-home #dessert and it still is today! Photo and full interview with the long-time manager of Junior's appears in our book "New York Nights". 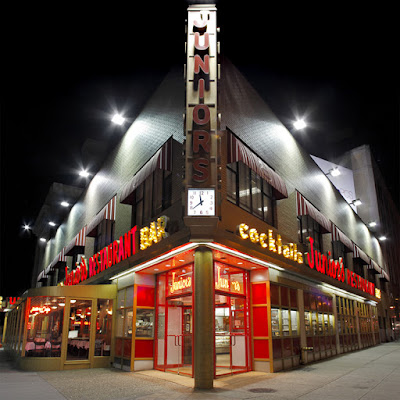 Posted by James and Karla Murray at 2:08 PM