Moondance Diner on Sixth Avenue at Grand Street in Manhattan closed in 2007, to make room for a luxury hotel.

The 1930s ‪#‎vintage‬ ‪#‎diner‬ was known for its ‪#‎burgers‬, ‪#‎fries‬ and #milkshakes and was owned by Sunny Sharma. The TV show "Friends" used Moondance as the diner where the character Monica, played by Courtney Cox worked. Moondance Diner was also used by the film "Spider-Man" as the place where Mary Jane Watson played by Kirsten Dunst was employed. Luckily the diner was saved from demolition and purchased for $7,500 by Vince and Cheryl Pierce, who moved the structure by flat-bed truck to LaBarge, Wyoming at a cost of $40,000. After some much needed repairs, they reopened the diner in Wyoming in 2008 where it remained in operation until 2012. We especially loved the diner's rotating moon ‪#‎sign‬ and the sparkling ‪#‎letters‬ spelling "Moondance" in an interesting ‪#‎font‬. We haven't heard any news on the fate of this diner since its closure a few years ago but hope that it will again be saved. 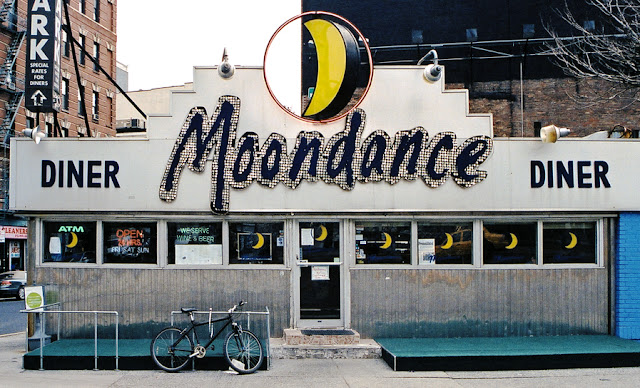 Posted by James and Karla Murray at 7:00 AM