The Ford Fairlane 500 Skyliner, with a retractable hardtop, was produced by Ford in the United States for the model years 1957, 1958 and 1959. The Skyliner had a complex mechanism which folded the front of the roof and retracted it under the rear decklid. No hydraulic mechanisms were used as in regular convertibles of the era. The Skyliner top has five electric motors , down from seven for the previous models, four lift jacks, a series of relays, ten solenoids, four locking mechanisms for the roof, and a total of 610 ft (185.9 m) of wiring. The large top took up vast amounts of trunk space, limiting the car's sales.

During the 1959 model year the Galaxie series was added to Ford’s full-size range and the Skyliner model was absorbed into that series. Although the 1959 Galaxie was designated as a separate series, Galaxies carried both “Fairlane 500” and “Galaxie” badging, on the rear and sides respectively. It came with the standard 2-barrel 200 hp V8. At the time of its introduction, the Skyliner was the only true hardtop convertible in the world. Today, it is a collectible car. 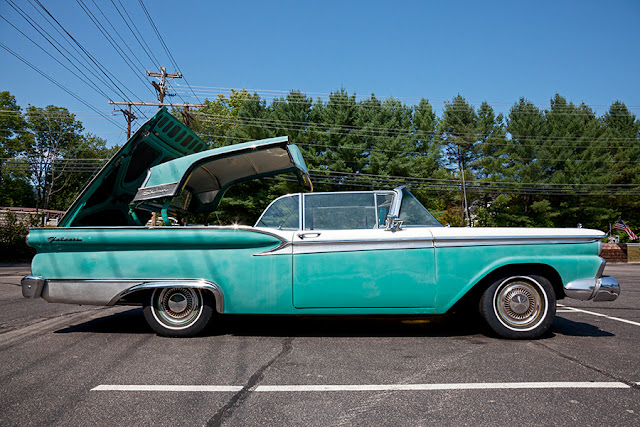 Posted by James and Karla Murray at 7:12 AM