Auggie's Coffee in the South Village or what is now known as SoHo from our upcoming book "Store Front II: A History a Preserved"

Today we are posting another preview photo from our upcoming book "Store Front II: A History a Preserved" which is due in stores by mid-November. Auggie's Coffee in the South Village or what is now known as SoHo is no longer in business. Peter Longo, the owner of Porto Rico Coffee and Tea took over this ‪#‎vintage‬ ‪#‎coffee‬ and ‪#‎espresso‬ shop but was forced to close it a few years ago when his lease expired and rent was increased. We loved its classic ‪#‎signage‬ complete with old phone exchange "W06" which you rarely find these days. ‪#‎storefront‬ ‪#‎disappearingfaceofnewyork‬ ‪#‎font‬ ‪#‎typography‬ 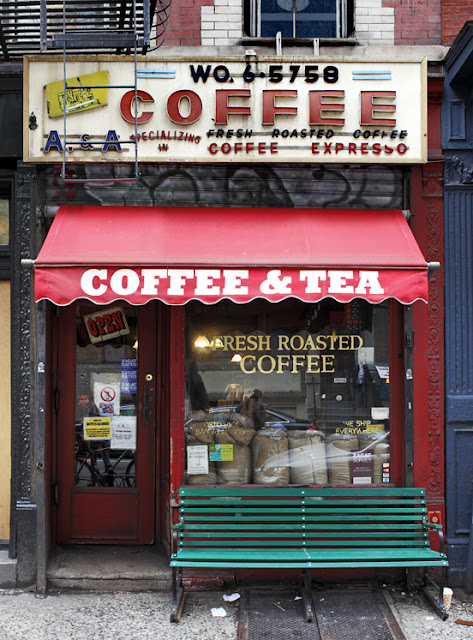 STORE FRONT II - A HISTORY PRESERVED Named by Publishers Weekly as one of the 35 "Big Indie Books of Fall" FALL 2015 "James and Karla Murray have been capturing impeccably accurate photographs of New York City since the 1990s. In the course of their travels throughout the city’s boroughs they’ve also taken great care to document the stories behind the scenery. The Murrays have rendered the out of the way bodegas, candy shops and record stores just as faithfully as the historically important institutions and well known restaurants, bars and cafes. From the Stonewall Inn to the Brownsville Bike Shop and The Pink Pussycat to Smith and Wolensky, the Murrays reveal how New York’s beleaguered mom & pop business stand in sharp contrast to the city’s rapidly evolving corporate facade." 348 Pages Hardcover 13 1/4" x 12" $65
Posted by James and Karla Murray at 7:54 AM